Ever since Meshuggah first started using 8 string guitars way back when, plenty of bands have followed suit, journeying down the rabbit hole of sound that additional strings bring to the party.

The most notable of which is perhaps Deftones’ Steph Carpenter and, of course, Animals as Leaders’ Tosin Abasi (who has his own range of 8-string of guitars called Abasi Guitars).

Both use eight-string guitars, albeit in completely different ways, and both are fairly well known in the rock/metal scene.

Steph from the Deftones has always been vocal about his love of eight-string guitars; he loves the range you get and the deep n’ dirty bass on the lower strings that makes for truly unique chuggin’ effects when combined with an appropriately tuned bass guitar.

What Guitar Does Steph Carpenter Use on Deftones’ Ohms Record?

According to Steph’s actual Instagram, he is now the proud owner of a custom 9-string ESP guitar. The 9-stringer ESP was made in Japan to Steph’s exact specifications, though the main event is obviously the addition of a ninth string for even more low-end rumble.

This custom guitar, a one-off built to Stef’s specifications, has nine strings. Yes, nine. As most ESP players are well aware, Deftones guitarist and co-founder Stephen Carpenter has been part of the ESP artist family for a very long time, going back almost 25 years since he first started playing our guitars. Stephen is tremendously influential as a guitarist, with thousands of players who’ve been inspired by his textured sounds that often stem from guitars with extended range.

Carpenter said the 9 string ESP guitar was a “piece of art” on his Instagram, where you can see even more pictures of the guitar.

Steph also confirmed that he used a pair of custom Fishman pickups on the 9 string ESP custom guitar. These pickups were used on the new Ohms LP and will almost certainly be used when the band goes back on the road in 2021 to support the album.

I know, I know – many of you will probably think 9 string guitars are heresy, that they shouldn’t exist, or that they make bass guitars more or less redundant.

I know I have friends that positively HATE eight-string guitars, so when you’re talking about adding in an extra string? Forget about it!

Beyond extended range, guitars with more than six strings have many additional benefits for certain types of players and sound. Andrew Baena is perhaps one of the most well-known 7, 8, and 9 string guitar players out there.

In the video below, Andrew outlines ALL the reasons why he prefers playing 7, 8, or 9 string guitars…

Can You Buy 9 String Guitars?

You also cannot buy Steph’s 9-string guitar, either. In fact, you’ll struggle to find ANY guitars anywhere with 9-strings. ESP doesn’t appear to have any plans on releasing Steph’s guitar as a signature model – at least just yet, anyway. And even if it did, it’d be HELLA expensive. Way more than $3000 most likely.

If you do fancy trying a 9-string guitar, one of the only options on the market right now is the Legator LM-9 Lucas Mann Ninja. It comes with EMG 909X pickups, a Strat-style body, and, of course, 9 strings. The guitar is a monster and at $1600 it is relatively affordable compared to what you’d pay for a signature ESP model.

The 9-Stringer For The Masses... 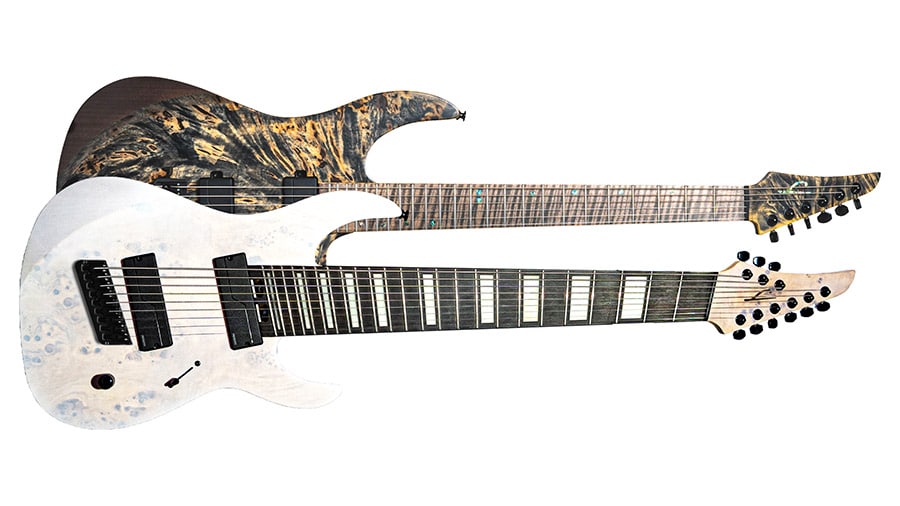 It looks like a weapon. And with its EMG 909X pickups, it sounds like one too. If you want to play a 9-string guitar, this is one of the most affordable and well-specced options on the market right now. It's niche, yes. But it is also a MONSTER...

Still, the Legator LM-9 Lucas Mann Ninja ain’t cheap. But if you’re in the market for a 9 stringer, it is just about the only option in town right now. When it comes to 8-string guitars, you have way more options – and some are pretty affordable too, like the Schecter Demon 8 ($549) and the Ibanez RG8 ($399.99).

Or, if you want to dial in that Meshuggah chug, you can pick up the Ibanez M80M for $1499.99 – this is the model used by the guys in Meshuggah. It is glorious looking and has all the electronics and tweaks you’ll ever need to djent your pants off. Me? I’d take the Schecter Demon 8 ($549) of it any day of the week – it’s around 50% cheaper and just as good. 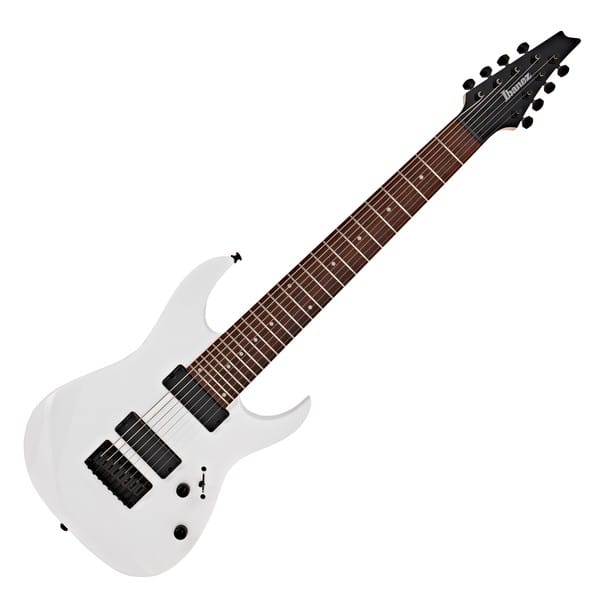 Ibanez is famous for making brilliant, affordable guitars. The Ibanez RG8 8-String is no exception. This massively affordable 8-string runs IBZ-8 humbucker pickups in the neck and bridge and looks and plays like a dream. If you’re on a budget, this is exactly what you’ve been searching for…

VIEW LATEST DEALS
We earn a commission if you make a purchase, at no additional cost to you.
The "Meshuggah" Guitar 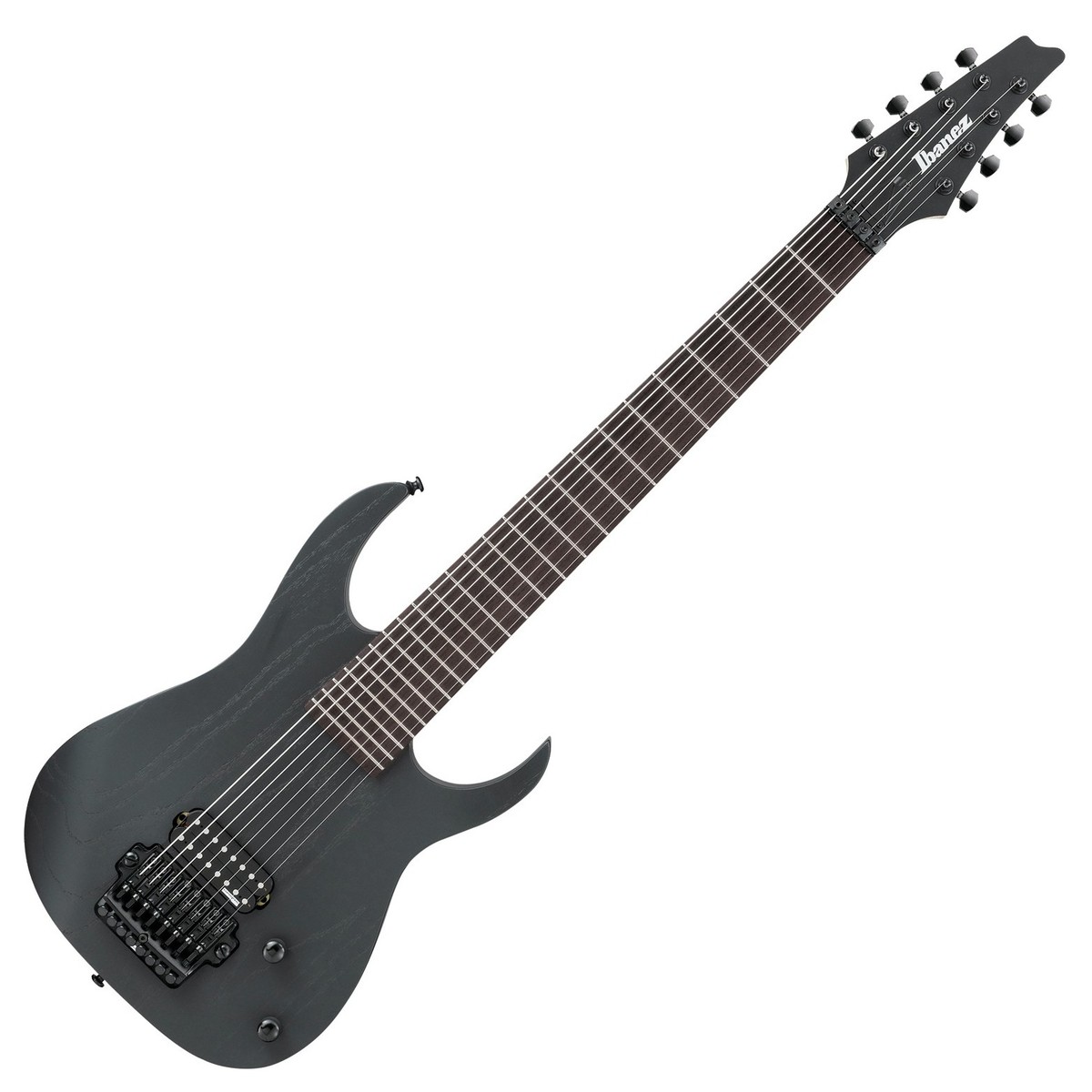 This is the exact model used by Meshuggah. Built to the band’s exact specifications, the Ibanez M80M 8-String is one of the most well-known 8-string guitars on the planet. Rocking a single Lundgren Model M8P bridge pickup, this guitar is designed for djent. But you can also rip up some amazing-sounding jazz on it too.

VIEW LATEST DEALS
We earn a commission if you make a purchase, at no additional cost to you.
Our Favorite 8-String Axe... If you want a reliable, affordable, quality guitar, you really cannot go wrong with Schecter. And the Schecter Demon-8 is by far and away one of the best 8-string guitars we have ever used – at any price point. This thing is beautifully made and its Schecter Diamond Active HB-1055 humbuckers ensure it sounds as good as it looks. Incredible stuff.