5 Reasons Why The Orange Crush Amp is The Perfect Amp

Is the Orange Crush amp any good? Personally, I think it is the perfect practice amp – here are five simple reasons why…

You can really get lost when looking at practice amps. As of right now, there are literally hundreds of potential options and, annoyingly, most of them are very, very good.

You have amazing options from Boss, Fender, and even the likes of Positive Grid, as well as a huge, ever-growing selection of FRFR speakers for the more digitally minded players out there.

But there is one practice amp that has stood the test of time, has ALWAYS sounded great and has been used by beginners and guitar greats the globe over. And that amp is the Orange Crush – or, any of the models available inside Orange’s Crush amp series.

My practice amp for YEARS, my go-to setup, the one I use more than any other, is an Orange Crush amp. The exact model? The Orange Crush 20RT; it has lived and served in my home office for many, many years now. The Crush 20RT is a 20W solid-state amp that, like other amps in the Crush range, delivers stunning tube-like tones that are ideal for rock and metal.

Should you buy an Orange Crush amp? Are Orange Crush amps any good? Here are five simple reasons why we here at ELECTRIKJAM love our Orange Crush amps. And it doesn’t matter if you’re an absolute beginner or a seasoned pro with years of experience, these little practice amps pack a serious punch and will be a brilliant addition to your at-home guitar setup.

Orange Crush Amps – 5 Reasons Why We Love Them…

Look, Orange is unashamedly old school. It cut its teeth powering some of the biggest and heaviest rock and metal bands from the 1970s onwards. It knows how to create tone and what goes into making a killer amp. And with the Orange Crush, it hasn’t changed a damn thing…

Yes, we live in a digital age but Orange still believes – and rightly so, too – that amplifier circuitry should be analog. This is what gives Orange amps their now-iconic lively feel and responsiveness. Add in a super-responsive 3 band EQ section, a standard feature on all models, and you can craft real tube-like tones with masses of color and depth.

Whether you want to play clean or turn up the gain for some screeching metal, the Orange Crush can oblige. Want to connect pedals? No worries, it’ll do that happily too. I actually love the clean tone on my Orange Crush 20RT; it has plenty of clarity, especially when paired with a decent reverb pedal, but it also has this organic “thickness” that I simply cannot recreate anywhere else.

4. Loads of Gain With Loads of Clarity

If you’re a regular at ELECTRIKJAM, you know we predominantly look at gear from the angle of metal and/or rock music. If that’s your bag, like us you will love the Orange Crush series. The amps are built with high-quality components – see above – and feature four completely different stages of gain, all with their own unique quality, richness, and character.

You have a separate channel for distortion that can be clicked on by a switch or using a foot pedal (you’ll need to buy this separately, however) and you’ll find yourself using this channel A LOT because the ultra-high gain distortion channel sounds absolutely insane. In fact, I’d argue it sounds so damn good you could definitely record with it – it really is that impressive.

Between the distortion channel and the other gain settings, you’ll be able to create all kinds of tones – from heavy blues and rock to more mellowed-out but still punchy 1970s/1960s guitar tones. As I noted earlier, the Orange Crush is also brilliant for clean tones. Essentially, this is one of the most versatile amps, tone-wise, on the market today at this price point.

3. They Do Cabinet Simulation – Ideal For Bedroom Rockers

If you live in a small flat, have neighbors or young kids, you seldom get to practice at full volume at home. And this makes having huge guitar rigs kind of pointless – unless you have a soundproof room or underground bunker. Orange clearly understands this problem, however, and it has a novel solution on its Crush amp.

It’s called “Cabinet Simulation” and what it does is simple but amazingly effective. When you plug a pair of headphones into the amp, the Crush amp will automatically switch to Cabinet Simulation which is based on a mic’d Orange 4×12″ cabinet, so it sounds – in your headphones – like you’re playing inside an actual venue or large practice space.

You can even use the Crush’s Cabinet Simulation mode to connect your amp to a mixer and/or recording console. Or, As I like to do: hook it up to my iMac via my Focusrite SOLO audio interface. With this approach, I can quickly record ideals, demo songs, and work out the flow of songs on my computer with my headphones on. It’s great and, trust me, a mic’d Orange 4×12″ cabinet whether real or simulated sounds freakin’ HUGE.

2. Orange’s Voice of The World Speaker is DAMN Good

The main event inside Orange’s Crush amps, however, is its speaker. Affectionately branded under the name The Speaker of The World, Orange’s powerful, incredibly versatile speakers are designed to deliver masses of low-end punch, vintage-sounding highs, and plenty of detail in the mid-range. It also stays clear no matter how hard to push it, which I like.

The Speaker of The World is also incredibly loud when pushed. I’ve only ever had my up past the halfway mark once, during a practice session with a drummer. And even then, playing along with live drums in a small room, I was hardly even pushing my Orange Crush 20RT – it has PLENTY of power left to give. The point I’m trying to make here is this: do not be put off by the Orange Crush’s compact size. When required, these amps will get very loud, very quickly.

Want to know something? When I bought my Orange Crush amp, I didn’t have any idea about how good it was. I bought mine because it looked totally badass. All my favorite guitarists, from Brent from Mastodon to Mat Pike, use Orange amps. I wanted to do the same, albeit on a much smaller scale, so I bought my first Orange amp.

I love the color of Orange amps. I love the way they don’t try and look modern. From the mesh front to the logo, everything is just retro as f**k, and I love this about Orange. If they were a pair of jeans, they’d be denim Levi’s in a bell-bottom cut. And they’d probably stink of weed too. God, I love these amps.

OK, we’ve covered off why the team here at ELECTRIKJAM loves Orange Crush amps, so the next obvious question is which one do you get? Orange makes a range of Crush amps – from the small to the not so small. The one you go for will depend largely on what you want to do with it.

Let’s take a look at all the available Orange Crush amp models you can buy right now: 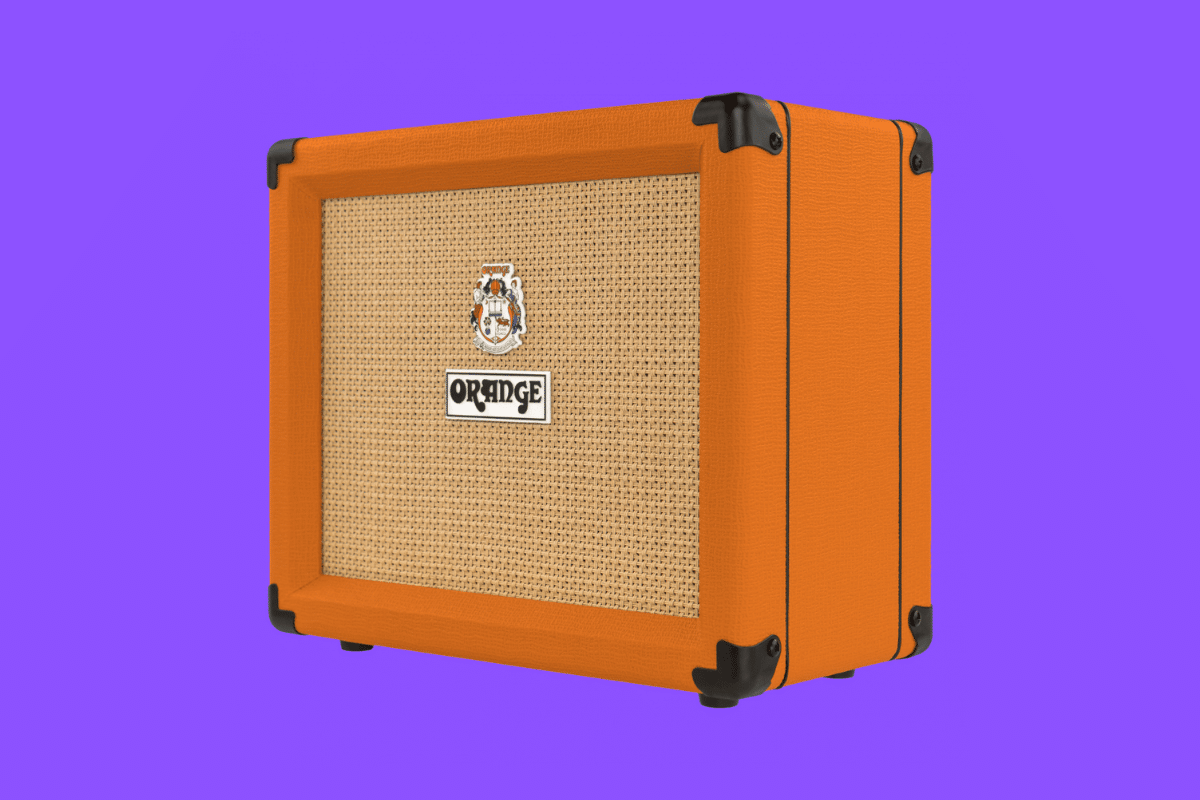 From the super-loud and powerful to small, compact practice amps. If you want massive tone, loads of control, and iconic styling, there is nothing better than an Orange Crush amp.

If you want to play metal, you need plenty of low end, lots of gain, and the ability to customize your sound with an EQ. Orange Crush amps do all of this and more, making them an ideal choice for metal guitarists. The gain controls alone are enough to make any of Orange’s Crush amps perfect for metal. But the addition of a dedicated distortion channel AND CabSim makes it damn near perfect.

Is An Orange Crush Amp Worth Buying?

The best Orange Crush amp for your exact needs will depend entirely on what you intend to do with it. If you’re playing with a live band regularly, you’ll need something with some punch. Personally, I’d recommend either the Orange Crush 35RT on the budget end of the spectrum or the Orange Super Crush 100 on the more expensive end of things.

If you just want a killer practice amp that sounds good, supports headphones, will pair up with pedals nicely and will connect to a mixing console and/or your computer, and also doesn’t break the bank, go with the Orange Crush 20RT. I have this amp and it is brilliant. For the money, I don’t think there is a better practice amp on the market right now.

Check out ALL the Orange Crush models – there are loads of options across a range of price points.