What Guitars Do Ghost Use? A Ghoulish Guide…

What guitars do Ghost use? In this guide we’ll look at what Tobias Forge uses to record Ghost albums and what his nameless ghouls use when they’re playing live – there’s some excellent gear coming!

Ghost’s new album, IMPERA, is now out and the band, as ever, is pushing forward into new territory. In my review of Ghost’s IMPERA, I called it a “classic rock” album – meant in the nicest possible way – because to my ear, it sounds like a combination of Journey, REO, and Rush. It’s a heady mix to be sure.

Ghost is a bit of an odd band to cover in a gear roundup, however, because it doesn’t really work like other bands. All the music is written and recorded by Tobias Forge and a selection of session musicians and then, when the band is on the road, touring, Forge does vocals and the nameless ghouls play the music.

What Guitars Do Ghost Use?

In a live situation, Ghost’s two guitarists – affectionately known as the Omega Ghoul and Fire Ghoul – from 2016 onwards have used Hagström Fantomen Custom guitars. This is a guitar designed in collaboration with Ghost and, while it is based on the Gibson RD Standard, it packs in plenty of unique features and embellishments per Ghost’s wishes and requirements.

Ghost’s guitarist can also be seen using a modified Gibson RD Standard in plenty of live videos online too. Again, the Gibson RD Standard is a beautiful-looking guitar. But in order to extract the best possible tone from it, both guitarists switched out the Gibson pickups for a set of Seymour Duncan pickups. They also added a coil-tap switch as well to get the overall sound and tone where it needed to be for live situations.

But it doesn’t end there. When they’re not playing live, the Nameless Ghouls do have additional guitars that they use. In an interview with ToneDeaf, one of the band’s guitarists – his name isn’t given – explains that his daily driver, the guitar he writes on at home and plays most, is a Gibson SG Standard. In black, obviously.

Our guitars differ between what we’re touring with and what we’re recording with. At home, all the music is written on my guitar here at home, which is a regular black Gibson SG, which is highly regular.

But that’s my go-to guitar, that’s my favourite guitar. And usually when we go into the studio, there’s nothing wrong with that guitar, but it tends to detune a bit too quickly. I’ve changed the screws on it, but in the studio you want something reliable.

In the studio we tend to use one set of things and live we use Gibson RDs and those are really good for the live thing. Also, just for the coloration of the sound, we want to use different guitars in the studio.

It should probably be noted that the quote above is from an interview before the band started using Hagström Fantomen Custom guitars. At this point, both guitarists – at least in a live situation and in the studio – were using Gibson RD Standard guitars with Seymour Duncan pickups. 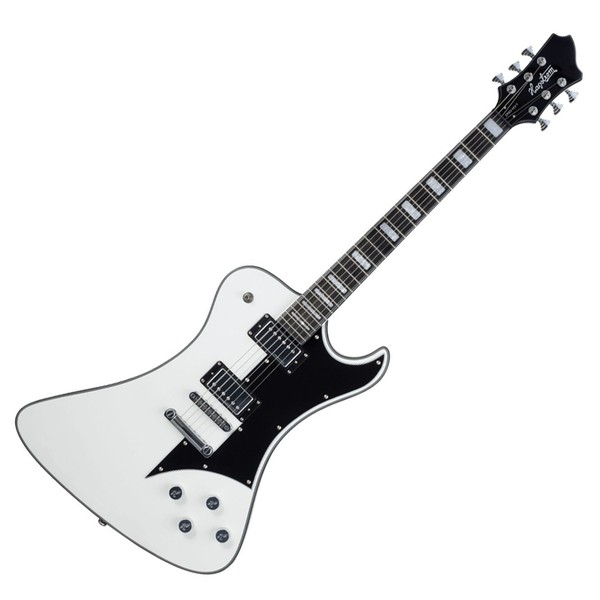 Designed by Ghost in collaboration with Meshuggah’s Martin Hagström who helped dial in the pickup's tone and output. It features a unique body design, a 25.5"-scale mahogany neck, a 3-way switch, and a thin neck for faster playing. It is a stunning guitar and well worth the asking price.

What Guitars Does Tobias Forge Use?

Tobias Forge writes all of Ghost’s music. Like Trent Rezner of NIN, Ghost starts and ends with Forge. When the band plays live, he adopts his stage persona – currently Papa Emeritus IV – and undertakes vocal duties. But Forge does write all the guitar parts and composes all the additional music as well.

So what guitars does Tobias Forge use? Forge has been in quite a few bands before he founded Ghost. As a veteran of the Swedish metal scene since the early 1990s, Forge has accumulated a raft of guitars. As of right now, Forge tends to use Fender and Gibson guitars when writing and recording Ghost material, as you’d expect – he now has more than enough money to buy in the good stuff.

As of 2022, here’s a complete rundown of Tobias Forge’s guitar collection:

Plenty of Ghost songs, some of its best, in fact, use acoustic guitars, and, again, Forge is a big fan of Gibson in this context. Forge has been seen using a Gibson acoustic – likely a J-185 EC Modern – as well as a PRS SE Limited Edition A50E acoustic guitar which at just $899 is one of the best sounding acoustics you can get for under $1000 these days.

Ghost also use D Standard as their main tuning; this is a whole step down from standard tuning and is a key part of their guitar sound. D Standard sounds lower and heavier than Standard tuning which is why it is so popular with metal bands like Ghost. You can check out all the different types of guitar tuning used by modern guitarists and bands inside our Alternative Guitar Tunings Resource Center.

Designed by Ghost in collaboration with Meshuggah’s Martin Hagström who helped dial in the pickup's tone and output. It features a unique body design, a 25.5"-scale mahogany neck, a 3-way switch, and a thin neck for faster playing. It is a stunning guitar and well worth the asking price.